We have 101 guests and no members online

Calculation of NIEL and Displacement Stopping Power for Elements and Compounds

The non-ionizing energy-loss (NIEL) accounts for the amount of energy - lost by a particle passing through a medium -, which was imparted to create atomic displacements. It can be expressed in units of

is the number of atoms per cm3 in the absorber, ρA and A are the density and atomic weight of the medium, respectively; N is the Avogadro constant, E is the kinetic energy of the incoming particle; ER and ER max are the recoil kinetic energy and the maximum energy transferred to the recoil nucleus, respectively; Ed is the so-called displacement threshold energy, i.e., the minimum energy necessary to permanently displace an atom from its lattice position; the expression of L(ER) is the Lindhard partition function discussed, for instance, in Sects. 4.2.1 and 4.2.1.2 in [Leroy and Rancoita (2011)]  (see also references therein and [Jun (2001)]); finally, dσ(E,ER)/d ER is the differential cross section for elastic Coulomb scattering for electrons or protons or ions on nuclei. Furthermore, the non-ionizing energy-loss (NIEL) can be expressed in units of MeV cm2/g as

with χ =x ρA, ρA the absorber density in g/cm3 and dEde/dχ the displacement mass-stopping power.

Furthermore, the displacement stopping power can allow one to determine the Dose due to non-ionizing energy loss process (i.e., the NIEL dose).

In the above equation, the medium has to to be thick enough to fully absorb the kinetic energy of recoil nuclei.

In the framework of the screened relativistic NIEL approach, the values of NIEL in units of MeV cm2/g for electrons (e.g., see Sect 2 of [C. Baur et al. (2014)] ) are obtained using the Mott differential cross section [Mott (1929)] of electrons on nuclei calculated from the practical expression discussed in [Boschini et al. (2013)] (see also [Linjian et al. (1995)]) and accounting for the effects due to both screened nuclear potentials and form factors discussed in [Boschini et al. (2012)] and Sects. 1.3.1-1.3.3 of [Leroy and Rancoita (2012)]  (see also references therein).

Hereafter, (i.e., see Chapter 2 in [Leroy and Rancoita (2016)]) is reported the discussion about the currently implemented form factors in this calculation of the nuclear stopping power and screened relativistic NIEL. 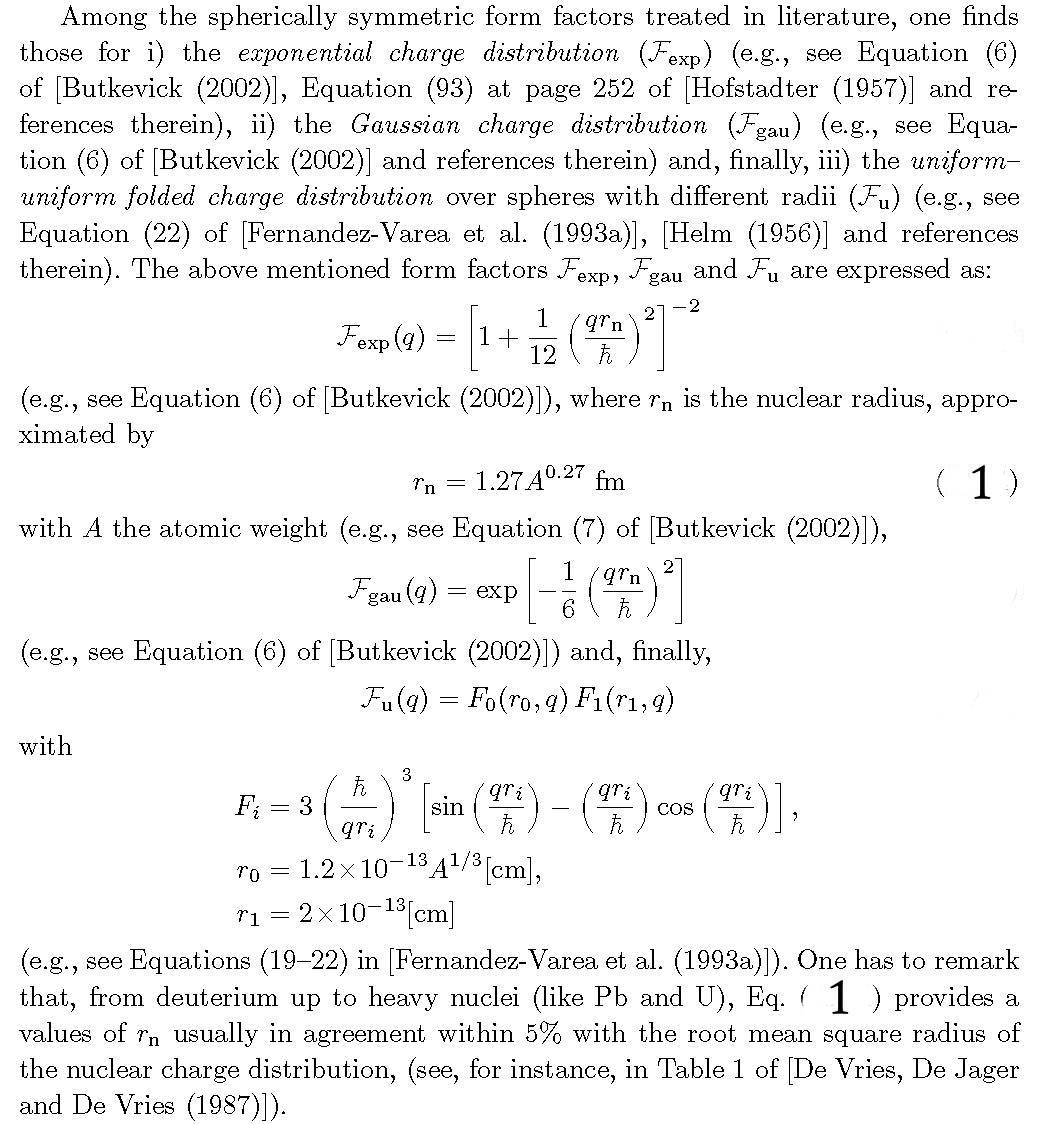 The Coulomb contribution to the overall NIEL for protons and nuclei above 50 keV/nucleon is obtained using the elastic cross section derived from treatment of the nucleus-nucleus screened Coulomb scattering discussed in [Boschini et al. (2011)] and Sect. 2.1.4.2 in [Leroy and Rancoita (2011)] (see also [Fernandez-Vera et al. (1993), Butkevick (2002), Boschini et al. (2010)]). That treatment allows one to deal with a scattering occurring up to relativistic energies.

For energies lower than 50-200 keV/nucleon, the scattering of protons and screened nuclei can be treated using the 4-terms analytical approximation of the ZBL cross section derived by Messenger et al. (2004) [see Eqs. (1--3, 15) and also references therein].

It is worth to note that, in the framework of the screened relativistic treatment, the diplacement stopping power (thus the NIEL) is calculated as a function of the displacement threshold energy (e.g., see Chapers 2, 7 and 8 of [Leroy and Rancoita (2016)]).
Furthermore, for protons in Si and GaAs absorbers, the NIEL contribution resulting from hadronic interactions was estimated, for instance, by Jun et al. (2003) at Ed =10 eV. These authors found that for protons with energies above about 20 (30) MeV this is the dominant NIEL process - with respect to that due to elastic Coulomb scattering -  in a Si (GaAs) absorber. A discussion about this topic can be found in Sect. 4.2.1.4 of [Leroy and Rancoita (2011)]) and Chapter 7 in [Leroy and Rancoita (2016)]. 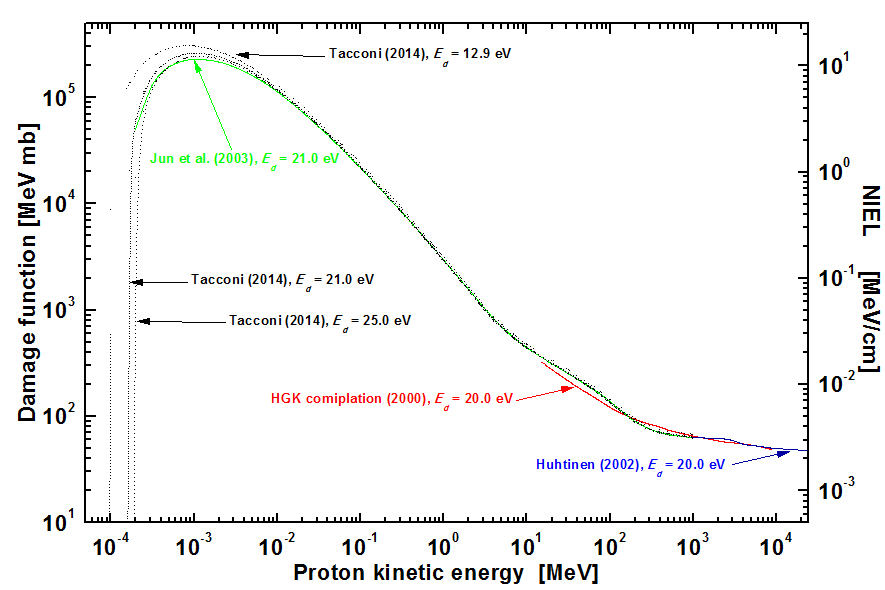 NIEL for compounds can be determined by means of Bragg's rule, i.e., the overall NIEL in units of MeV cm2/g is obtained as a weighted sum in which each material contributes proportionally to the fraction of its atomic weight. For instance, in case of a GaAs medium ones obtains (e.g.,, see [Jun et al. (2009)] and Eq. (2.20) at page 15 in [ICRUM (1993)]):

and AGa [AAs] are the NIEL (in units of MeV cm2/g) and the atomic weight of Gallium [Arsenic], respectively.

Vasilescu and Lindstroem (2000), compilation previously available on line including neutron damage functions and protons from a private communication of Huhtinen and Aarnio (1993) on the energy range 15MeV -- 9.0 GeV.