We have 17 guests and no members online

Occurrence probability of events due to a large energy deposition in devices, e.g., single event effects (SEE), induced by protons or ions fluences impinging isotropically on the device

The occurance probability of events due to large energy depositions in a device - like those commonly referred to as single event effects (SEE) – is usually expressed by means of the cross section as a function of mass electronic stopping power - or mass restricted energy loss - of the device material (e.g., see Sects. 11.4-11.4.9 of [Leroy and Rancoita (2016)] and references therein).
As discussed in this webpage, one can re-express that device cross section as a function of the energy of incoming particles. In this way, the overall events occurrence can be estimated using the entire range of particle spectral fluence. In fact, nowadays the spectral fluences of low- and high-Z cosmic rays were observed up to very high energies (e.g., see here).

For particles impinging perpendicularly to the device front face, the functional form for expressing the SEE cross section for a device is commonly provided by the Weibull function. Such a cross section is obtained using measurements with uniform monodirectional particle fluences. The distribution of particle paths inside the device is expected and is found to follow that expressed by Eq. (1) of [Luke and Buehler (1998)], as discussed in [ECSS-E-HB-10-12A] and [ECSS‐E‐ST‐10‐12C].

The current calculator allows one to determine the equivalent SEE cross section when the same device is exposed to isotropically distributed particles like, for instance, to cosmic rays in space missions. The equivalent cross section is obtained by means of a GEANT4 simulation.

The following link allows one to access to the Calculator regarding the Probability of events occurrence due to a large energy deposition in devices for fluences of isotropically distributed protons and ions using either a Weibull function cross section determined with particles impinging perpendicularly on the device surface or the equivalent cross section for isotropically distributed particles determined with the Calculator available at this web page:

- Occurrence probability of events due to a large energy deposition in devices, e.g., single event effects (SEE), induced by particles impinging isotropically on the device

This tool calculates the Probability of events occurrence due to a large energy deposition in devices for a spectral fluence incident on a material.

Currently, as an example, the default parameters for the Weibull function are those for the device treated in this webpage.

In the section "Device Material Selection" it is possible to specify an User Defined device material or a predefined Compound. User can also select the device as a gas, this is allowed only for single element and natural gas target (H, He, N, O, F, Ne, Cl, Ar, Kr, Xe, Rn).

in the User Defined section individual elements can be selected as well as the composition of the device material choosing the number of elements in the compound. The required parameters for each element are:

This section define the parameters needed to derive the SEE cross section for isotropic particle field. Alternatively, the user can provide the input file obtained using this calculator.

The user has to set the device dimensions: heigh (h), width (b) and depth (t) in μm. See the following figure for target device geometry. 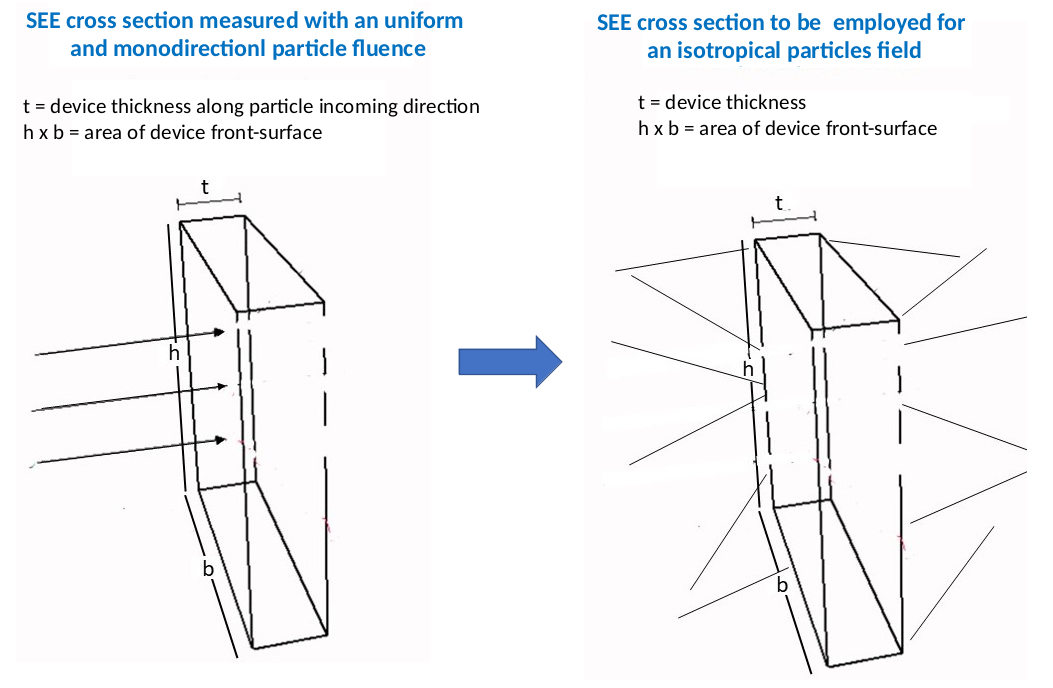 One has to remark (see webpage) how the physical mechanism of energy deposition per unit length in a medium is such that the resulting computed value of restricted energy loss depends on the overall traversed path to which W0 is related. The electronic stopping power, on the other hand, does not depend on the incoming particle direction with respect to the medium surface.

For particles impinging perpendicularly to the device front face, the functional form for expressing the SEE cross section for a device is commonly provided by the Weibull function:

The SEE cross section for a device exposed to isotropically distributed particles like, for instance, to cosmic rays in space missions is obtained by means of a GEANT4 simulation.

When restricted energy loss is selected, the Effective detectable energy W0 can be modified: the current default value is 50 keV.

Figure 1. Energy limit (in MeV/amu) below which there is no difference in between the SR-Framework electronic stopping power and the restricted energy loss as a function of W0.

In the calculator panel, using the pull down menu, the user can select the species of the incident particle, either a proton or one of the elemental ions.
The user can also modify the mass (in amu) of the incident particle (e.g., for all isotopes one can refer to this page): the default mass is that of the most abundant isotope (MAI), except for proton and alpha particle masses. Further information are available at the following webpage.

The result page contains the input spectral fluence and the SEE cross section as a function of energy. The spectral fluence is interpolated and divided in 1000 energy bins to obtain the total number of SEE. The calculation is performed with three types of stopping power (SRIM, SR electronic stopping power and Restricted energy loss). The energy, fluence, cross section and spectral number of SEE are reported in the table.