We have 23 guests and no members online

The nuclear stopping power of electrons in matter can be obtained from the differential cross section describing the electron–nucleus scattering. For instance, in Chapter 2 and of [Leroy and Rancoita (2016)] (see also [Boschini et al. (2012)] and references therein), the differential cross section for electron–nucleus scattering was dealt to describe their interaction up to ultra high-energy and, in addition, it was accounting (above about 200 keV) for the effects due to the screening of Coulomb potentials, finite sizes and finite rest masses of target nuclei. In fact, it has to be remarked - as derived by Zeitler and Olsen ([Zeitler and Olsen (1956)]) - that spin and screening effects can be separately treated for small scattering angles; while at large angles (i.e., at large momentum transfer), the factorization is well suited under the condition that

(e.g., see [Zeitler and Olsen (1956), Idoeta and Legarda (1992)]). Zeitler and Olsen suggested that for electron energies above 200 keV the overlap of spin and screening effects is small for all elements and for all energies; for lower energies the overlapping of the spin and screening effects may be appreciable for heavy elements and large angles. Furthermore, to a first approximation, the finite nuclear size effects can be accounted for by means of the nuclear form factor (e.g., see Eqs. (2.262, 2.264, 2.265) of [Leroy and Rancoita (2016)] and discussion in Sect. 2.4.2.1), for instance, the so called exponential form factor (Fexp) expressed by Eq. (2.262) of [Leroy and Rancoita (2016)].

That treatment allowed Boschini and collaborators (2012) to the nuclear stopping poower of electrons using the Mott differential cross section (MDCS), dσsc,F,CoMMott(T)∕dT dT, and its approximate expression, i.e., the McKinley and Feshbach differential cross section (McFDCS), dσsc,F,CoMMcF (T)∕dT, so that also the screened Coulomb fields, finite sizes and rest masses of nuclei were taken into account, i.e.,

where T is the kinetic energy transferred to the target nucleus, Tmax is the maximum energy that can be transferred during a single collision process, nA is the number of nuclei (atoms) per unit of volume and, finally, the negative sign indicates that energy is lost by electrons (thus, achieved by recoil targets). It has to be remarked that, in the current treatment for the MDCS, Boschini and collaborators (2013) derived an improved numerical approach and an interpolated expression (e.g., see Sections 2.4.1–2.4.2 of [Leroy and Rancoita (2016)] and [Boschini et al. (2013)]).

As discussed, for instance, in Sect. 2.4.3 of [Leroy and Rancoita (2016)] (see also [Boschini et al. (2012)] and references therein), the large momentum transfers - corresponding to large scattering angles - are disfavored by effects due to the finite nuclear size accounted for by means of the nuclear form factor. For instance, in Fig. 1 the ratios of nuclear stopping powers of electrons in silicon are shown as a function of the kinetic energies of electrons from 200 keV up to 1 TeV. These ratios are the nuclear stopping powers calculated neglecting i) nuclear size effects (i.e., for

2 = 1) and ii) effects due to the finite rest mass of the target nucleus both divided by that one obtained using Eq. (2). Above a few tens of MeV, a larger stopping power is found assuming

2 = 1 and, in addition, above a few hundreds of MeV the stopping power largely decreases when effects due to the finite nuclear rest mass are not accounted for. 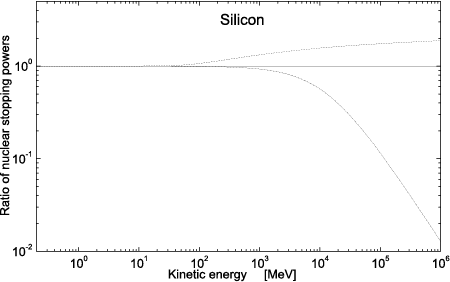 Figure 1: From Boschini and collaborators (2012), ss a function of the kinetic energy of electrons from 200 keV up to 1 TeV, ratios of nuclear stopping power of electrons in silicon calculated neglecting i) nuclear size effects (i.e., for

2 = 1) (dashed curve) and ii) effects due to the finite rest mass of the target nucleus (dashed and dotted curve) both divided by that one obtained using Eq. (2).

In Fig. 2 , the nuclear stopping powers in 7Li, 12C, 28Si and 56Fe are shown as a function of the kinetic energy of electrons from 200 keV up to 1 TeV. These nuclear stopping powers in MeV cm2/g (i.e., mass nuclear stopping powers) are calculated from Eq. (2) - using F exp - and divided by the density of the medium. The flattening of the high energy behavior of the curves is mostly due to the nuclear form factor which prevents the stopping power to increase with increasing Tmax. As expected, the stopping power are slightly (not exceeding a few percent) varied at large energies replacing Fexp with Fgau or Fu (e.g., see Eqs. (2.264, 2.265) of [Leroy and Rancoita (2016)], respectively). However, a further study is needed to determine a most suited parametrization of the nuclear form factor[Nagarajan and L. Wang (1974), Duda, Kemper and Gondolo (2007), Jentschura and Serbo (2009)] particularly for high-Z materials. 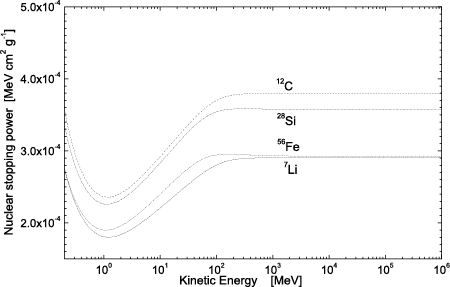